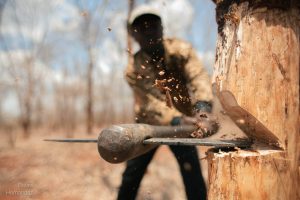 Jalandhar, 17 August: Adopting zero tolerance towards axing of trees in the state, the Forest department has now started lodging FIRs with Police against the people indulging in such crime to ensure stringent punishment to these criminals. Divulging the details, Conservator of Forest  Satnam Singh and Divisional Forest Officer Vikram Singh Kundra said that on the directions of Forest Minister Sadhu Singh Dharmsot, the department has geared up to check the illegal felling of trees in the range. They said that on August 13 the Forest department had busted a gang involved in cutting of trees by after they were caught felling a tree illegally. They said that this gang had planned to axe 11 trees in the range but due to strict vigil of the department they were caught cutting the first one only.

The officers further that acting swiftly the department has got a FIR registered with the Police in Bilga Police Station. They further said that the department has also seized the equipments used by this gang to fell the tree. The officers said that eight persons deployed by the kingpin of gang to fell the trees have admitted that they were hired by a contractor to axe the trees. They said they based on statement of these eight persons FIR has been registered against head of gang Harbhans Singh of Boparai village adding that this kingpin has been arrested by the Police. They said that shunning the earlier practice of compounding such erring persons, the department has now decided to bat got Police action against such defaulters so that exemplary action could be ensured against them. Forest Range Officer Davinder Pal Singh was also present on the occasion.