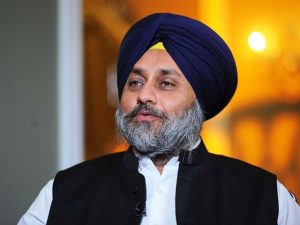 Chandigarh: Shiromani Akali Dal (SAD) president Sukhbir Singh Badal today said Prime minister Narendra Modi had achieved the unique distinction of emerging as the protector of the ‘annadata’ and most pro-farmer PM of India by effecting a historic increase in msp of 14 kharif crops in four years time, something which the Congress government had failed to do in fifty years of rule.

Reacting to the path breaking decision taken by the NDA government which had increased paddy msp by Rs 200 per quintal and that of cotton by as much as Rs 1100 per quintal, the SAD president said the record increase in msp of 14 crops had fulfilled the main recommendations of the Swaminathan Commission report. “The report prepared by eminent agro-scientist Dr MS Swaminathan came up with a formula to ensure 50 per cent profit to farmers on total cost of production. This has been implemented in toto fulfilling a long standing demand of the SAD which has been spearheaded at all relevant forums by S Parkash Singh Badal”.

The SAD president said PM Narendra Modi had fulfilled his commitment to save the rural economy and save farmers from distress. “The massive increase in msp of various crops will reduce the liabilities of farmers in Punjab and suicides, which have been on the increase ever since the Congress government reneged on its promise to implement an Rs 90,000 crore loan waiver promise, will also reduce. This is why he has emerged as the most pro-farmer PM of independent India”, the SAD president added.

Stating that all this was achieved in a short span of four years, Mr Badal said successive Congress governments at the centre had only mouthed platitudes for farmers for fifty years. “No Congress government did anything to tackle the crisis in the agrarian sector leaving it to Narendra Modi ji to take this bold path breaking decision”.

The SAD president also thanked former chief minister Parkash Singh Badal for his long term advocacy of the Swaminathan Report. He said the former CM had always stood up for the cause of farmers in his long political innings spreading over nearly seventy years. “It is a matter of pride for the SAD that Badal Sahab’s consistent efforts have finally borne fruit and the farming community now has a pro-farmer formula to calculate msp for all crops”.

Badal said farmers in Punjab would witness huge gains with today’s decision with enhanced msp translating into an increased income of Rs 6,000 to Rs 8,000 per acre. “A new trend has been started which will reverse the decades of discrimination meted out to Punjab by repeated Congress governments”, he added.