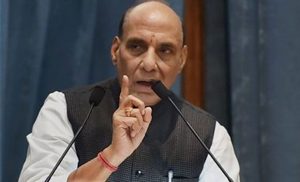 Srinagar, 11 September(Wishav Warta): Union home minister Rajnath Singh said on Monday the BJP-led government at the Centre will not go against the wishes of the people of Jammu and Kashmir on constitutional provisions that guarantee special privileges to the restive state, amid a debate over articles 35A and 370.

Singh is on a four-day visit to the state which comes at a time when the valley is experiencing agitation against attempts to abrogate Article 35A of the Constitution, which gives special rights to the permanent residents of the state, and the arrest of seven separatist leaders by the NIA in alleged terror-funding cases.

“The government did not initiate anything on this or went to court. I assure the government would never take any step which will hurt the sentiments of people of Jammu and Kashmir,’’ he said.

Singh called it a “non-issue’’ and said it was being raised by people who have nothing “else to talk about’’. He said “his assurances have come as a home minister of India’’ after he was asked about the individuals or organisations challenging these constitutional provisions were affiliated to Rashtriya Swayamsevak Sangh (RSS), the BJP’s ideological mentor.

“I don’t want to comment on who is saying what but I am talking as a leader of the BJP and home minister of India,’’ he added.