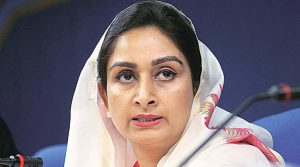 Chandigarh: Union food processing minister Harsimrat Kaur Badal today urged Prime Minister Narendra Modi to take up the issue of humiliation being meted out to the Sikh community in France by asking its members to remove their turbans for all official identification with French President Emmanuel Macron during his ongoing India visit.

The union minister, who has written in this regard to the Prime Minister, said she had received repeated requests from the Sikh Community settled in France as well as the Counseil Representatif des Sikhs de France that a law which required removal of turbans while being photographed for Passport, ID Card, Health Card, Transport Card, Driving License or any other identification issued by the French administration was causing them severe humiliation.

Stating that this law was also a violation of Sikh tenets, Badal said the Sikh community was confident that this issue could be addressed under the dynamic leadership of the Prime Minister. She said this was very important because nowhere else in the world were Sikhs subjected to this kind of discrimination.

Asserting that the turban was an integral part of the Sikh identity, Badal said there was a need to sensitise the French Government about Sikh culture and explain and sensitivity of the community on this issue.

FINE OF RS 61.69 LAKH IMPOSED ON 13648 PEOPLE FOR NOT WEARING MASK UNDER ‘MISSION FATEH’ BY COMMISSIONERATE POLICE