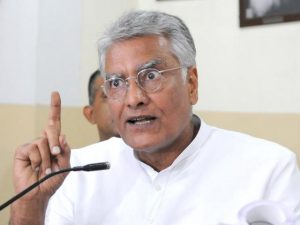 Chandigarh: Beating the Prime Minister Narendra Modi at his own argument in calling Chief Minister Capt Amarinder Singh an “independent soldier”, Punjab Congress president Sunil Jakhar today said that he (Modi) had actually acknowledged the free and democratic culture prevailing in the Congress under the leadership of Rahul Gandhi.

Besides, he added, the Prime Minister had also recognized the self-respecting and independent character of the Punjabis represented by Capt Amarinder.

“This is quite contrary to the autocratic and dictatorial culture prevailing in the Bhartiya Janata Party under Modi where saner and seasoned voices like those of LK Advani, Murli Manohar Joshi, Yashwant Sinha and Shaturgan Sinha have either been silenced or banished to the Marg Darshak Mandal”, Jakhar said in a statement issued here today.

Asserting that the Congress needed no certificate from the BJP about watching the interests of Punjab, the PCC president challenged him that if he was really such a well wisher of Punjab, he should reimburse Rs 31,000 crores that was siphoned off by the previous state government in which his party (BJP) was an alliance partner, which was blindly overlooked by the centre.

Similarly, he reminded the Prime Minister that it was twice during the BJP regime at the centre that special packages were given to the hill states of Himachal Pradesh and Jammu and Kashmir at the cost of Punjab’s economic and industrial interests. Punjab economy is still suffering on account of these packages, he added, while pointing out, the centre had never provided any relief package for border areas in the state.

Jakhar also referred to the anti-Punjab and pro-Haryana stand of the Modi government at centre on the SYL issue in the Supreme Court of India, which otherwise had been settled for good by Capt Amarinder way back in 2004 by enacting ‘Punjab Termination of Agreements Act, 2004’.